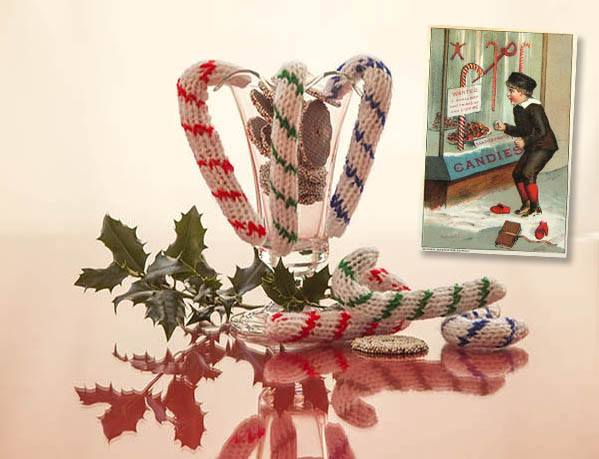 Every year, when the first striped, sugary candy canes appear in the shops, I think of Christmases past. Fun filled times spent in New York come to mind, surrounded by jolly Santas; twinkling, fairy lit trees; carriage rides through central park; ice skating in the open air; the magic of Hamleys toy shop; and the taste of sticky, peppermint flavoured candy on my lips.
So who invented the candy cane and what is its history? It is difficult to accurately write the story of this sweet confectionary; some facts seem plausible, while others are surely fantasy. What I can be sure of is that the candy cane has taken hundreds of years to develop into the sugary sticks we eat today. They first made an appearance in Europe during the seventeenth century, when special cookies and sweets were prepared as part of the Christmas festivities. During the 1670′s a German choirmaster, finding it difficult to keep children still during long nativity services, bent white sugar sticks into a shepherd’s staff and passed them out to the children. This custom spread through Europe and eventually it crossed the sea to America where fancy canes, still white, but decorated with sugar roses were handed out as part of religious services at Christmas time.

Looking back through the surprisingly vast quantity of material written about candy canes, the first historical reference of it appearing in America is in 1847, when a German immigrant called August Imgard, decorated the tree in his Ohio home with pure white candy canes. No one knows who actually invented the stripes in the cane, but Christmas cards prior to 1900 show all-white candy canes, whereas cards after 1900 are striped. Around the same time a candy maker in Indiana is said to have designed a red and white striped cane that told the real story of Christmas – the virgin birth.
There are numerous legends and myths surrounding the candy cane, many with a religious twist. I like to think that the candy cane was a secret symbol of Christianity when Christians were oppressed and isolated. The cane held up the wrong way does look like ‘J’ for Jesus, and red and white stripes maybe represent Christ’s blood and purity. Likewise, the three stripes could symbolise the Holy Trinity, and the hardness of the candy could represent the foundations of the church being rock solid. I can find no actual historical evidence to support these theories, but I like to think that this humble confectionary maybe does have its roots in Christianity, and will make my Christmas ever more magical as I take the first pepperminty lick.
Knit some candy canes for Christmas, find the FREE pattern here.