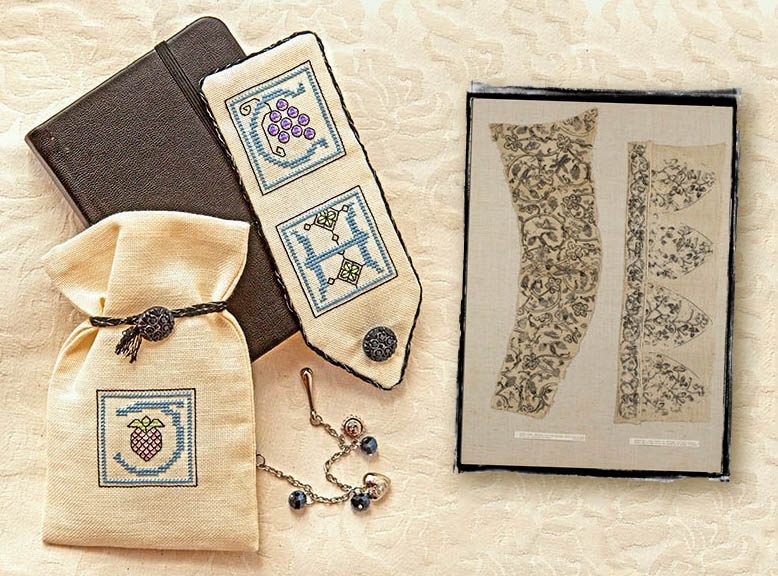 Whilst helping my daughter with research for a school project, I was once again reminded of the wonderfully skilled stitching found on clothing of the Elizabethan period.
This sleeve panel (above right), which can be found in the V&A collection, is made using tailoring methods of the 17th century, where the sleeves are made in two pieces. You can see the under sleeve, which is probably one section of a woman’s jacket, and although the tailoring is probably a little later than Elizabethan, the embroidery technique called blackwork, is very reminiscent of Elizabethan work. Made by a very accomplished needlewoman, the blackwork, on linen fabric, is made up of tiny black running stitches, which mimic woodblock prints of the time. The designs were usually stitched in a single silk colour, mainly black, but sometimes in blue, red or, green. This unfinished sleeve panel depicts insects, grasshoppers, dragonflies, butterflies, moths, caterpillars and beetles, all which were popular nature images for blackwork of that period, on both men’s and woman’s clothing and accessories such as handkerchiefs, coifs, caps, shirts and smocks.
My cross stitch alphabet is worked on fine linen, and features twenty six Elizabethan style letters, surrounded by nature images which I have outlined in black thread. I made a simple bookmark and bag with three of the letters, but they would make great personalised cards or tags, or you could stitch the complete alphabet and display it framed.