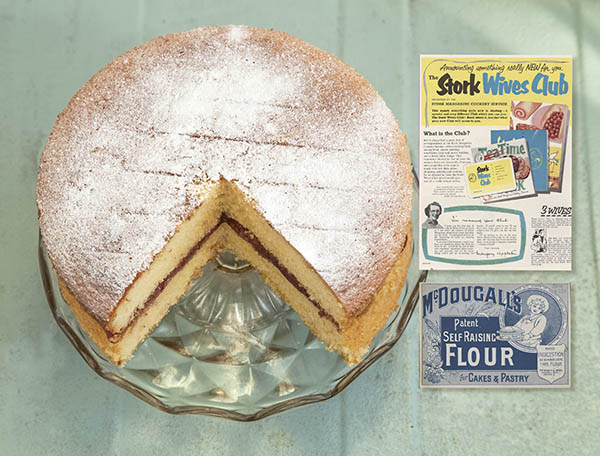 Susan Penny reflects on her childhood baking experiences
My first ever sponge cake was made for a Stork margarine/ MacDougall’s flour baking competition at school. Although my rather uneven, slightly burnt offering didn’t win, it did get me a highly commended certificate, and a desire to improve my cooking skills.
As a child I remember my mum using Stork to make cakes. I particularly loved her English Madeleines: a soft sponge cooked in Dariole moulds, smothered in jam, rolled in coconut, with a cherry placed on the top. Stork made the perfect sponge, and in my eyes mum was the quintessential 60s housewife, using soft margarine instead of butter. I had assumed that Stork was new: a modern product for the modern housewife. So, when I checked, I was surprised to find that Stork has been on British shelves for over 90 years. In fact, it was launched in Britain during the 1920s, but it took the Second World War, when rationing was introduced, to make Stork a household name. The Stork Cookery Service advised housewives on home cooking. Recipes for meat-free meals, sugar-free cakes and puddings, and ways of using up what they could grow and forage to feed their hungry families.
In 1955 when ITV was launched, Stork started to advertise on commercial television. This boosted popularity and it suddenly became a household name.  The following year Stork launched The Wives Club gaining 191,000 members in the first year. By the mid-1960s, a quarter of a million women were enjoying the advice given on cooking, catering, and shared recipes. So what about McDougall’s self-raising flour? In 1864 the McDougall brothers developed and produced a patent substitute for yeast. This was added to their flour. It revolutionised home baking, and made McDougall’s a household name.
I take comfort in knowing that generations of women have made their cakes with soft margarine. I might not be a trail blazer, and neither was my mum, but the next time I cook with Stork or McDougall’s flour I know I will be adding a lot of history to my cake.
Find the full recipe here